I seem to have overlooked writing anything about my new job. I was very fortunate to have found an amazing PT clinic/Pilates studio in Tromsø that was in need of a new instructor. Finding a job was a major source of stress for me in planning the move to Norway and even more of a stress once we realized that my salary was going to be needed here given the crazy cost of living – Noway has the highest cost of living in the world. It is evident in that a single can of beer at the grocery store is about $5, a cup of coffee is about the same, rent for a 2 bedroom apartment is around $2500…crazy. So, after settling in for 2 months, I hit the pavement and applied fro about 30 different jobs. Most of them told me I needed to know more Norwegian which was not going to happen quickly despite attending Norwegian language lessons twice a week. Luckily most adults here are fluent in English so as long as I only have to work with somewhat educated adults I am fine. This pretty much fits the bill of a Pilates studio or most gyms in Norway. I was offered a few job positions at local gyms but of course the Pilates-PT combo fit my resume perfectly! It is quite difficult and time consuming (about a 6 month wait) to get my PT license in Norway that would allow me to work for any of the goverment supported health care facilities. The clinic I am at is private and therefore only private pay. I am not currently treating patients, but may in the future. For now I am teaching Pilates in a small group class a few times per week. In the fall I will pick up a lot more classes including some for pregnant women, new moms and people with specific injuries like back pain so at least I get to use a lot of my PT knowledge and skill! The part that is interesting to me is the pay. There is not much to it, but you can check out the website: Pilates Studio of Tromsø.

So new job…check. Next we were in search of a new and more importantly, cheaper, apartment. I mentioned in my last post that we were also successful in this search and have moved to a new apartment. It is 10000 kroner less per month. Yes 10000kroner, equivalent of about 1750 us dollars…that is A LOT of difference in monthly rent!  I updated our address on the blog main page. We were living on the north end of the city center in a two bedroom apartment that was newly renovated, but was not a very kid friendly place and was ridiculously expensive. There is a housing shortage on the island, so people are paying extraordinate amounts for rent.  We had been on a waiting list for some government housing and an apartment finally came available. It is just on the south side of the city center, and is much less expensive (yeah!). It is 3 bedrooms, but much older. The best part is the location, a brand new turf soccer field in our front yard, Odin’s 1st grade next door, and a short bike ride one direction to the barnehage and the other direction to the best beach in town! We are loving it. 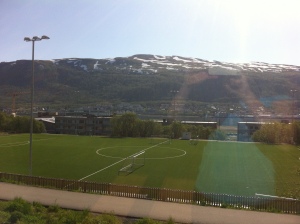 Third major decision was school for Odin. Odin will begin 1st grade next year, which in Norway is the 1st year of school. Kindergarten I have already covered does not entail actually learning anything so they learn the alphabet and all the basics in 1st grade which begins the year you turn 6. Odin will enter 1st grade at the neighborhood school – Bjerkaker Skole. He had orientation, which we had no idea was such a big rite of passage for the 6 year olds in Norway. Most of the kids were dressed in nicer clothes and cameras were everywhere. We did not come prepared, but managed a few photos with the phone. the kids and parents all gathered in the school yard as the principal introduced the three 1st grade teachers. The classes were then assigned as names were read out. Everything was said in Norwegian, so we just kinda followed the masses. We are getting better at understanding the language, but not good enough to listen to a full 15 minutes speech and know what is going on! Odin was assigned to 1B. He was quite nervous, but luckily recognized a boy from his barnehage who was in his class. After we all filed into the classroom, the teacher welcomed the kids and read a story (also all in Norwegian). Fruit and juice were served to all the kids as they learning about the school. We have no idea what was said during this time:) Next came the fun part – each student was given a brand new box of colored pencils (no crayons in Norway – all colored pencils, even in the barnhage and when you get a kids coloring sheet at the restaurants) and a new bright yellow backpack with their name on it. The students were called one at a time to the front of the classroom where the teacher put their backpacks on and everyone clapped – the rite of passage!

We will see how it goes for our little man. We were torn between sending him to the Norwegian school or the International school where everything is in English. Hopefully we made the right decision. We were so focused on this decision for Odin and making sure he was ok with his new school that we forgot about Adelheyd dealing with the change. She looked up at me after the orientation and said in her sweet raspy voice, “mom, i am ok with Odin not going to the same school as me next year because I can play with Aina (their little friend from Spain)”. I felt so bad that this change affecting her did not even cross my mind. I gave her a big hug and told her that I was proud of her bravery:) 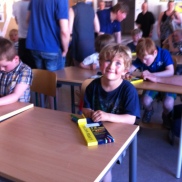 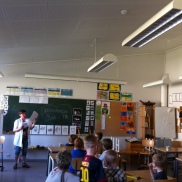 Posted by montanabrowns on June 16, 2013 in Uncategorized.