Just as Grandma and Grandpa were leaving from our wonderful visit with them in Norway, we were packing up our trusty VW minivan to hit the road and explore some new territory. The markers on the map above show where we stopped and stayed in both Finland and Estonia. We made quite a few stops, so I broke the reading up into two parts. First up…driving the E8 in Finland.

Driving first east into Finland, we were welcomed by more reindeer and mosquitos than you can imagine. The reindeer were cool to see and easy to avoid…the mosquitos were neither cool nor easy to avoid. They weren’t even possible to avoid, no matter how much bug spray and clothing covering every surface of our body (except faces and hands). It was less than ideal for a night of camping in our tent. We wondered to ourselves, how do people even live here in the summer? It was THAT bad. We were able to find a fantastic campsite alongside a river just South of Pallas Yllastunturi National Park , but ate in the parked car and climbed into the tent after braving the outdoors for only about an hour. Though the scenery was beautiful in its own way, we decided that we really don’t ever need to return to Northern Finland again:) 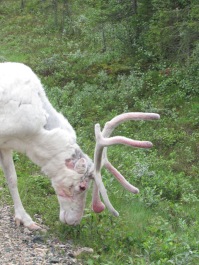 Mosquito warning…not that we needed one. It was quite obvious,

The next day we headed South and crossed below the Arctic Circle for the first time since our trip to Copenhagen. This does not really mean too much except we were soon to experience actual darkness at night when going to bed. I kind of got used to the light oddly enough. I almost forgot that lightswitches even exist! We arrived at the tip of the Gulf of Bothnia (sea between Sweden and Finland) for lunch and found a nice little Kebab shop. Starving, we ordered two Kebabs and a Pizza. Little did we know that the kebabs  were the size of Joel’s thigh…which is NOT small. The pictures on the menu just showed a kebab on a plate which we assumed was a normal dinner plate. Nope…it was HUGE and only 7euro. Ahhh…the best part of living in the most expensive country in the world (Norway) is that everything everywhere else seems oh so cheap! 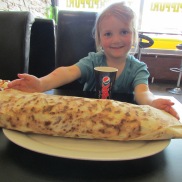 Onward we went down the E8 (this highway actually is the same one that starts in Tromsø, so we essentially can drive to Helsinki without ever leaving the E8)! It is not an ordinary highway…just a nice little 2 lane country road in US standards. We found a beautiful little Euro campground in Oulu to spend our second night and even splurged on a cabin due to the previous nights experience with mosquitos. They do get better the further South you go in Finland, but we were still in danger territory. We spent the afternoon exploring this cool little city known for its vibrant youthful population and beaches. From the campsite we walked 4km into town on beautifully paved walking/biking paths – I was impressed by the extent of these paths all through Finland. Adelheyd made it pretty much the whole way walking both directions – 8km for a 3 year old is not bad! The paths were populated with cyclists and more Rollerbladers than I have seen since the early 90s – after seeing this all through Finland we decided this must be the Finnish national past time. To go along with the rollerblades, most of the men had ponytails and wore jean shorts, they love a drink they call Long Drink, which is on tap at most every bar and tastes amazingly similar to Zima. We are not sure if they got stuck in the 90s and never emerged or they have just regressed back to the 90s, realizing that it a better decade than 2000s for Finland??? We may never know. 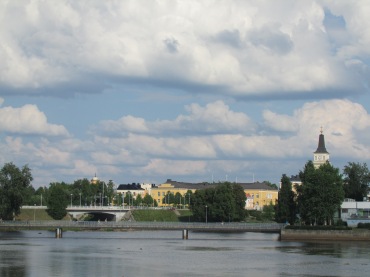 the town of Oulu 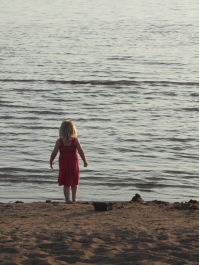 I love the beach!

the water is perfect…but no swimsuit with us…ohwell!

swimming with proper gear the next day

Back in the car after a morning at the Beach, we continued South through the farmlands of Finland and made our way to Rauma, a UNESCO World Heritage Town, famous for its traditional wooden village. We found another prime campsite on the water and very close to the city center. Though it is legal to camp most anywhere, a majority of people make use of the regulated Campsites that are like fancy KOAs complete with restaurants, rental bikes, showers, kitchens and any number of other attractions. This was a 4 start campsite and was particularly ‘fancy’. We had a nice restaurant, mini golf, a beach, and even late night Finnish karaoke…another of their favorite past times. We could not pass up any of these experiences. The karaoke being one of the weirdest things I have seen – in the hull of a wooden ship docked in the bay was a bar and that is where the Finns displayed their singing talent. We stayed for just one drink before we felt a little too uncomfortable with our company and called it a night. I have to also add here that Finland is somewhat famous for its saunas. I read somewhere that there is one sauna for every 5 people in Finland. That is A LOT of saunas. For those of you who know Joel well, a sauna is like torture for that guy. Why would you sit naked in a small room with strangers and sweat? So, there were saunas at every campsite and every hotel and even some random ones along the road. Strange. Back to Rauma…it was a very cool little town that we explored for an afternoon, saw a beautiful old church and bought some yummy peas from the local market. This became a regular purchase of our trip, fresh snap peas, cherries, and cherry tomatoes that the kids would gobble up! Yum!

relaxing by the tent

an actual sunset – haven’t seen one in months! 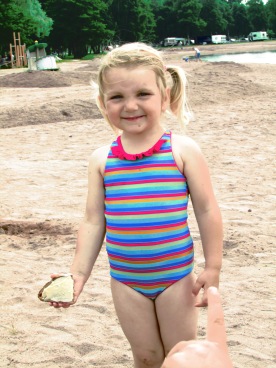 a little swim on the beach 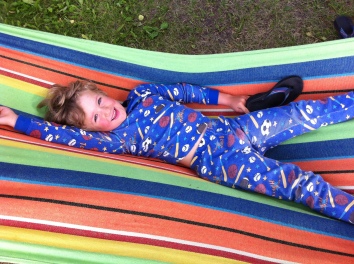 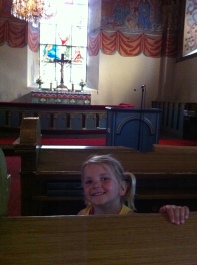 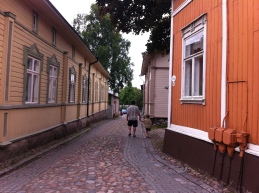 Our next stop was a short drive south to the Archipelago National Park area, a string of islands off the southwest coast of Finland leading towards Sweden. We crossed a few bridges and found a quaint little campground in the town of Pargu (about 45 minutes southeast from Turku on the map) with another beach and some nice big shady trees. Nowhere near as nice as the others, but it served its purpose. The kids got to swim, we relaxed. I even went for a nice little run. It is amazing how hard it is to exercise when on vacation. It takes a good bit of effort when it really should not be that hard…  I only have a few pictures from this area. 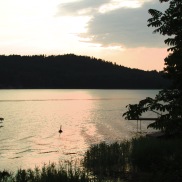 This marked the end of Part One of our Grand Roadtrip Adventure. Top 10 List Describing Finland:

10. Flat land with lots of trees

8. Don’t smile, no small talk or you will be thought of as crazy or drunk

6. Swimming in the Gulf of Bothnia

and number one you have probably guessed is…

Part Two: Estonia and Helsinki up next!!!

Posted by montanabrowns on July 6, 2013 in Uncategorized.