Navigating the System and the first weeks in Norway 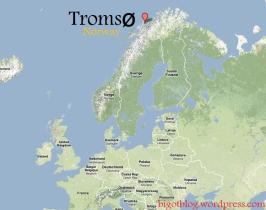 We arrived in Tromsø, via Iceland,  on February 19th, joined by Nana (aka Jackie McCoy), to help us get settled. The first month was a whirlwind. A week in a tiny hotel room, frantically trying to find an apartment to rent. The rental market here is incredibly tough, to the point that people set up viewings of their rentals and accept full resumes and interviews of their applicants. We were advised to even take an ad out in the paper to ‘sell ourselves’ as responsible people looking for a rental. The story of finding our apartment is a good one.

We arrived at a potential rental in the home of a Norwegian family wanting to rent our their basement. When they heard that we had two little kids, they told us that their rental was just not good enough for a family but that they would help us find something. The kind couple invited us into their living room while they phoned family and friends asking if anyone knew of available rentals. They finally contacted their contractor (they were in the process of refinishing their kitchen) who happened to have a brand new refinished apartment near the city center that he was considering selling. He agreed to meet us and consider renting instead so he promptly came over to the couple’s house and picked us up in his van. He spoke little English, so the husband of the couple joined us on the trek to view the apartment and help us translate. To make a long story a bit shorter, we moved into a great 2 bedroom apartment a few days later. We were warned that Norwegians can be a bit rude or rough around the edges, but there was no sign of it here. We are still in touch with the kind couple who helped us and have even recruited their teenage daughter as a babysitter!

In addition to finding an apartment, the other major task that first month was getting our ‘person number’, like a social security number but even more important. You cannot get a bank account, cell phone, internet service, library card, car, or anything else without a person number. Norway is known as a very socialized country which is great in a lot of ways, but it also means that there is a very high level of beaurocracy and organization. In other words, a lot of paperwork and a lot of waiting. It took about 3 weeks to get our person numbers, much longer than we wanted to wait as a lot of our other major ‘needs’ were put on hold. We became quite adept at figuring out the system and finding helpful people. Without a car we rode the very well organized bus system for the first 4 weeks. It is NOT easy taking two kids to a grocery store or out skiing on a bus, but we did it. One of my favorite bus adventures involved a large wheeled suitcase that I took to the grocery store, filled with food and wheeled back home via bus. It is even possible to take two kids, a backpack with snacks and blankets, 4 pair of skis and 2 sleds on the bus – not easy, but possible!

We now have an apartment, the kids are in school (more on that to come in another post later), we have a bank account, cell phones, car (yeah – much easier than the bus), internet (another yeah – that one took FOREVER) and all the modern wonders of the world. We have made many friends in the process and feel fairly confident in navigating our way around the system and around town. Whoever said that Norwegians were not very outwardly friendly (as we were told), was definitely wrong. They are some of the kindest and most giving people I have met. Now I guess there is some sort of truth to that statement in that you won’t get a smile on the street just walking around (in fact you may get a very stern look or a frown if you try to smile at someone), but the minute you ask for help the Norwegians will put everything on hold to give you a hand. There is a funny saying here that if someone smiles at you on the street you are either drunk, crazy,American, or all three:)

Another of my favorite sayings here, that you will see holds true in many of the pictures I will post, is that there is no such thing as bad weather, just bad clothing. It has snowed nonstop for the past 3 weeks, but it does not slow anyone down. Running, biking, skiing, strolling, camping, and just about anything you can do outdoors can be done in the snow it seems. You just have to have the right clothes. Even babies are well dressed and prepared to be outside for hours on end.

A little peak into our first weeks in Norway. We loved having Aunt Alli come to visit for a week from Sweden, joined by her wonderful boyfriend Boris:) Another post will show our fun time dogsledding with them! More also to come on the kids, their school, Joel’s job, my job search, our many fun adventures thus far and pieces of our daily lives in Tromsø.

The pictures below show some of the scenery around town, kids sleeping in our tiny hotel, a wait at the bus stop with Nana, and some views out the windows of our apartment (you will see the rooftops). 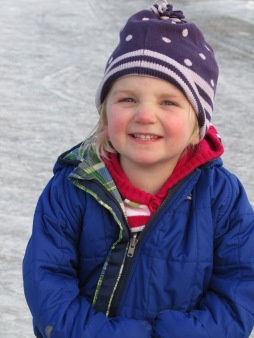 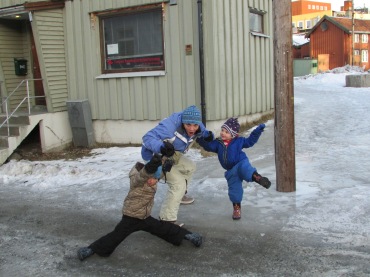 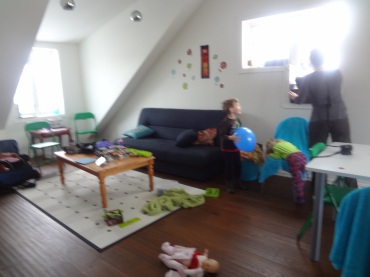 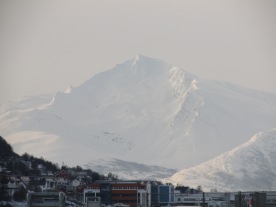 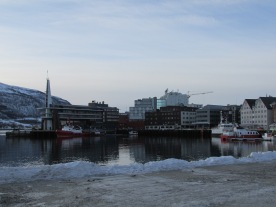 Posted by montanabrowns on April 7, 2013 in Uncategorized.